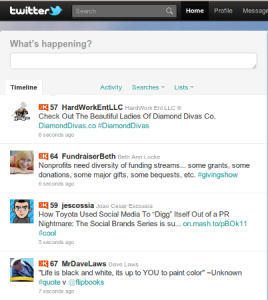 Businesses are jumping on the social media marketing bandwagon in a big way, and the trend doesn’t show any signs of slowing down. Major social networks such as Twitter, Facebook, LinkedIn, and Google+ are where the people are at and social media marketers have been forced to go among the masses to spread their messages in these growing networks. Despite their enthusiasm for finding new prospects using social media, businesses and organizations have to develop a disciplined approach to their social media communications. Social media marketing is extremely effective, both in a positive and negative way, and companies that plan to succeed follow need to follow a plan to achieve their end result.

As for myself, I’ve been using social media marketing on Twitter to help promote my brand, and I can see why everyone loves the idea so much. Twitter is a website that’s still confusing to many non-tech people, but it is truly a ‘can’t miss‘ website when it comes to spreading the word about your organization, professional services, or business products. Let’s take a look at some principles I’ve been following on Twitter which have been very helpful for spreading the message about my cloud hosting and SaaS business.

These are some of the principles I’ve learned doing social media marketing. I’d love to hear what you have to say about the subject. Thanks for stopping by and if you found this post to be valuable, Please Retweet it or share on any of your favorite social networks.