As more and more people have become accustomed to accessing information online, it comes as no surprise that the number of senior citizens embracing technology of all sorts, including mobile phones and the use of social networking websites such as Facebook and LinkedIn, is on the rise.

A recent study conducted by Pew Research found that as of February 2012, 58% of polled Senior Citizens responded that they owned a desktop personal computer and 61% stated they owned a laptop computer. 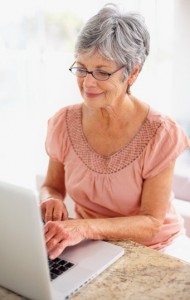 Further, one third (34%) of polled internet users age 65 and older reported using social networking sites such as Facebook and LinkedIn, with 18% of them using it in a typical day. Email remains a staple for this demographic of Internet user.

The Internet isn’t the only type of technology that Senior Citizens are embracing. The study also found that 69% of those polled owned a mobile phone - an increase from 57% in May 2010. Even 56% of those aged 76 and above responded that they owned a cell phone of some kind, meaning that even older generations have adapted to a more connected way of life.

After all, the Internet provides an affordable and convenient way for everyone to stay connected with friends and family, even if you don’t live nearby, so it makes a lot of sense that it appeals to senior citizens that might have limited access to transportation or other factors that limit their mobility - which I think is a good thing.