Back in the day, kids were taught to fight bullies with catchy comebacks like “Sticks and stones may break my bones, but words will never hurt me” or “I’m rubber, you’re glue - whatever you say bounces off of me and sticks to you.” 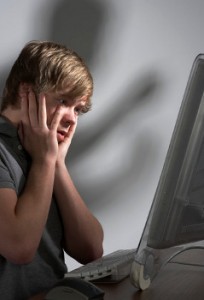 Don't Be A Cyberbully

Gone is the time when people were subject to taunts and teases only when they were in the presence of their tormentors.

With the proliferation of social media websites such as Facebook, Twitter and other social sharing platforms, the door  has been left wide open for cyberbullies to post insulting, harassing, embarrassing or spiteful comments online.  While some comments might just be left to be funny, comments made in bad taste can be hurtful for the person they are left for and can lead to unintended, tragic results.

In recent news, 10 students at a Minneapolis school were suspended after a  Facebook feud lead to a real life fight. The students involved insulted each other with obscenity laced comments at Facebook and now face suspension periods of 3-10 days. The Facebook posts that fueled the argument have since been deleted from the website.

Cyberbullying is a very real form of abuse that shouldn’t be promoted or tolerated by anyone, as some children have resorted to extreme measures such as suicide to deal with the pain it inflicted. If you, or someone you know is the victim of a cyberbully, speak to a parent or another trusted adult about it. For more online resources including information on Cyberbullying warning signs, the effects of Cyberbullying and get help at StopBullying.gov