It seems like every few years there’s a new darling of the social media elite.  This year it’s Pinterest.  In the last few months, you’ve probably noticed an onslaught of interest surrounding Pinterest.  It’s hard not to.  This is similar to what happened with Facebook, Second Life, or even Twitter.  One site is being hyped by everyone and then the ‘marketers‘ start pushing the destination hard as a place to promote your products or services. 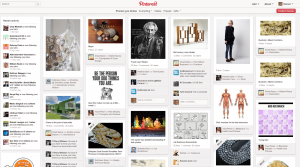 However, like most ‘social networks‘ self-promotion is not encouraged.  It seems interesting we always see this disconnect between the stated intentions of the network, and the interpretation of those terms from the second wave of adopters.  Let’s consider a few issues that are key to Pinterest.

These issues are common on most social networks, but seemingly a bit more pronounced on Pinterest.  As other social networks have done before, Pinterest plans on building its revenue on the backs of users who ‘share’ content.  Of course this content needs to be owned by the ‘sharer’ or ‘Pin-er,’ or it could lead to trouble.  The Toronto Sun wrote an article about this very subject today, which outlines how you could get sued for ‘Pinning’ something.  In fact, if you’re not careful, it will be YOU who is pinned for the crime!

As for the issue of ‘self promotion,’ Pinterest has a page that describes their ideal etiquette, which includes a section on this common marketing practice.

First it says”Pinterest is designed to curate and share things you love.”  Okay, you got it?  You’re supposed to share things you love, not things you get paid on.  Oh, I can imagine you saying, “But I love getting paid!”  Next, Pinterest follows up with “If there is a photo or project you’re proud of, pin away! However, try not to use Pinterest purely as a tool for self-promotion.”

Of course this can be overcome by not using Pinterest ‘purely’ as a tool for self-promotion.  Whether 99.9% self promotional material would be considered ‘pure’ or not could be argued.  Is the 0.01% of the content you share out of love enough to keep you from violating this clause?

Bottom line, keep in mind these two simple rules before you go head long into ‘marketing’ on yet another social media destination.

Whether some marketers are encouraging your participation on Pinterest or not, you have to read and familiarize yourself with their Terms of Service, especially if you’re serious about marketing your business on their platform.  That way you can avoid a lot of unpleasant surprised later on.